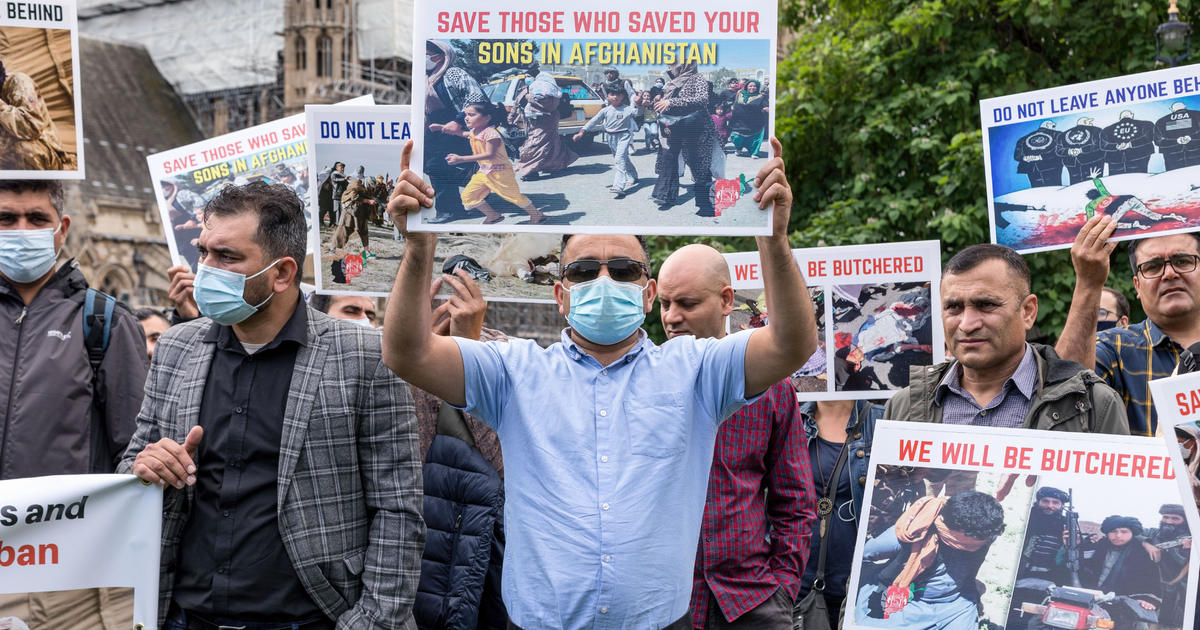 London — Amid scenes of frantic Afghans clinging to airplanes to try to escape the Taliban, some European leaders said this week that they would work to prevent migrants and refugees from journeying to the continent without permission.

Europe “should not wait until people stand at our external border. We need to help them before that,” European Union Home Affairs Commissioner Ylva Johansson said Wednesday, adding that some people in immediate danger should be resettled within the EU, but “it’s important that we can help these people in Afghanistan, when possible, to return to their homes. We also need to help neighboring countries and support Afghanis and these neighboring countries in the region.”

Johannsson also said that Afghans whose asylum claims are rejected in Europe should not be deported back to their country right now.

“We must anticipate and protect ourselves against major irregular migratory flows that would endanger those who use them and feed trafficking of all kinds,” French president Emmanuel Macron said on Monday. He said Europe would coordinate with transit countries like Turkey.

“We should not send the signal that Germany can take in everyone in need,” the leader of Germany’s Christian democrat party, Armin Laschet, said. “The focus must be on humanitarian aid on site, unlike in 2015.”

Many European countries have become increasingly hostile to migrants and asylum-seekers in recent years. That trend was partially a response to when, beginning in 2015, more than a million migrants and refugees traveled to Europe on foot or by boat, many of them fleeing the war in Syria.

Since then, many countries have tightened border controls. Leaders who welcomed asylum seekers at the time, including German Chancellor Angela Merkel, have faced political backlash.

Germany and France, the EU’s two biggest economies, both have elections coming up soon.

“We’ve seen this populist wave that has spent day after day, month after month, year after year demonizing refugees and migrants. That has certainly had an effect,” Daniel Balson, advocacy director for Amnesty International, told CBS News. “It’s had an effect in the United States, it has had an effect in Europe.”

“Stopping returns sends the wrong signal and is likely to motivate even more Afghan citizens to leave their home for the EU,” the countries said in a joint letter to the European Commission.

The United Nations has called for a moratorium on deportations and Denmark, Germany and the Netherlands have since changed course, halting deportations to Afghanistan in the wake of the Taliban’s dramatic retaking of power. But Austria is urging the establishment of deportation centers in countries close to Afghanistan as an alternative to allowing Afghans whose asylum claims are rejected to remain where they are.

“It’s not just about Merkel and Macron saying, ‘we’re not going to take refugees.’ They’ve been acting on that over the course of the previous multiple years,” Amnesty’s Balson told CBS News. “We should take them at their word.”

“Get out any way they can”

People from Afghanistan were already the second-largest group of asylum-seekers in Europe, with 570,000 having sought refugee status in the European Union since 2015. Those numbers had been increasing in recent months, since it became clear that the United States was committed to a wholesale withdrawal from the country.

The United Kingdom is the only European country to have committed to taking a significant number of additional Afghan refugees thus far, but the government says it will do so over a five-year period. The plan is to welcome 5,000 Afghans immediately and resettle a total of 20,000 over time. Critics say the plan doesn’t go far enough, with a Scottish parliamentarian urging British lawmakers on Wednesday to double the figure.

But Balson said it was likely that Afghans who cannot get permission to leave through an official resettlement program will try to leave by land, fleeing to neighboring Pakistan or Iran, the latter of which has already started setting up emergency tents along its border, according to Al Jazeera.

For many, those countries would not be intended final destinations, but likely first stops on long, dangerous journeys to try to reach European soil.

“People are going to look to get out any way they can,” Balson told CBS News. “Those who have money will look to take a plane out… One of the things that the Biden administration can do is secure the airport and protect it for as long as possible and grant landing rights and landing privileges to planes that already have been organized by either non-governmental organizations or other organizations to get people out.”

He also called on the international community to put pressure on Afghanistan’s neighbor countries to keep their borders open.

“None of us can predict the future, but it would be ridiculous to say that no one can foresee a huge need for refugee assistance on Afghanistan’s borders in the near future,” Balson told CBS News.