As beavers return to Britain, their presence becomes a gnawing problem 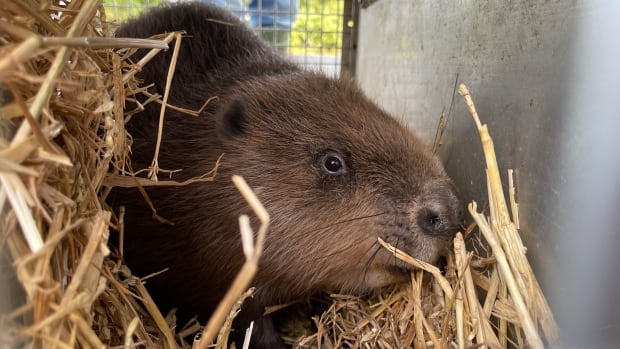 Tentatively at first, the two young beavers poked their heads out of straw-filled metal cages and waddled to the edge of a pond before gracefully sliding into the water.

“I can’t quite believe what I am seeing,” said an emotional Jonah Tosney, a river ecologist who along with 20 other spectators came out on a crisp, clear morning recently to a wetland area in Norfolk, southeast England.

They were there to witness what they believe amounts to the rebirth of a species.

“I’m just absolutely delighted,” Tosney said in a whisper, as those around him snapped photos to capture the moment.

For Canadians, the gasps of joy at the sight of beavers in a pond swimming and gnawing and doing what beavers do might seem a bit exaggerated.

Even if most Canadians rarely see the industrious creatures in the wild, they remain high in the public consciousness, with their likenesses enshrined on money, clothes and national emblems.

In the U.K., however, the return of the beaver is being hailed as a success for a policy known as rewilding — essentially repairing damaged ecosystems and creating more natural, diverse habitats.

Biologist Roisin Campbell-Palmer, who has helped bring back Britain’s beaver population, shows one of her projects in Norfolk, in southeast England. 1:00

But their growing presence has also fuelled a polarized debate about how many beavers the British countryside can support — and what the response should be when their busyness starts impacting people’s livelihoods.

Beavers were hunted to extinction all over the British Isles in the Middle Ages. It’s taken a two-decade effort by conservation groups to slowly reintroduce them into landscapes where they haven’t been present in more than 500 years.

Prime Minister Boris Johnson appeared to try to claim some of the credit for the beavers’ return when he gave his keynote speech last week at his party’s convention, claiming Conservative policies were responsible.

He even adapted the Conservative’s post-COVID slogan of “Build Back Better” to the moment.

“‘Build back beaver,’ I say,” Johnson said to huge applause.

British conservationists, regardless of their political leanings, would likely tend to support him on that point.

As one of nature’s greatest builders, ecologists claim wherever beavers go, other creatures and plant life follow.

“You would be very surprised at how they’re going to modify this habitat over the next year,” said Roisin Campbell-Palmer, a biologist and conservationist who’s colloquially known as Britain’s “beaver lady.”

The Norfolk beavers’ new home contains a small pond, a tiny creek and lots of deciduous trees — perfect for beavers to gnaw on.

Palmer trapped this pair of beavers in Scotland and brought them south.

“You [will] see them putting in dams, they’re going to open up the tree canopy by feeding and they’re going to change this place to hold more water and vegetation — from a biodiversity point of view, these guys are some of the best in the business.”

Twenty years ago, the only beavers in the U.K. were in captivity.

NatureScot, the public agency that oversees wildlife management in Scotland, conducted a survey in the winter of 2020 and reported there are now more than 1,000 beavers living in the wild, mostly in the county of Perthshire, north of Edinburgh.

The first beavers were initially released from nature reserves with the approval of authorities, while others escaped or were let go without official permission.

One thousand beavers may not seem like a lot, but even that modest number has managed to raise the ire of British farmers, particularly those in Scotland.

Already the beavers’ tree-felling, dam-building ways have re-shaped parts of the well-manicured Scottish countryside and their messiness — and in many cases crop damage — have not been appreciated.

“Beavers are ingenious animals, although I’d rather their ingeniousness was not done here,” said Adrian Ivory, who farms near the village of Alythe, outside Perth.

Ivory, 46, is a former British farmer of the year who has tried to position himself as a moderate voice in an increasingly toxic public fight over the future of British beavers.

Three years ago, he said, he lost about three hectares of grain after a beaver dammed up a creek at the foot of one of his fields and he didn’t spot it in time.

Ivory said the dam not only raised the water level of the creek flooding part of the field, but the higher water level also prevented other fields from draining properly, exacerbating the problem.

“We had already sewn the crop, it had been … drilled, rolled and seed was coming through. So that expense had been incurred and it was completely rotted out.”

Another time, Ivory said, he had to spend thousands of pounds to use a backend loader to destroy a different beaver dam.

He showed our London-based CBC team how beaver activity along a creek on his property had caused erosion,  destroyed fencing and left him with less land to farm.

“I think people don’t understand … how damaging it is to our livelihoods,” said Ivory.

In Scotland, which has different environmental regulations than England, beavers are listed as a protected species.

But farmers can still apply for licenses to kill animals they deem to be a nuisance.

In 2019, the last year for which data is available, 87 beavers were killed — about one-fifth of the Scottish beaver population.

NatureScot, which grants the licences, is now being sued over the practice by ecological groups that say it’s too easy for farmers to invent excuses to kill beavers.

They also want a cap on cull licences to give the beaver population time to expand further.

“I just think its a shame that we don’t carry out lots of mitigation measures so that humans and beavers can live alongside of each other in harmony,” said Danielle Muir, who runs popular wildlife tours from the Perthshire town of Alythe for people to see beavers in their natural surroundings.

One night recently, our CBC News team joined in one of Muir’s “safaris,” where we observed a family of beavers — two adults and two juveniles — that had built a series of dams, creating a marshy area between two farms, where none had been before.

“We don’t know if they are going to manage to survive,” Muir told a group of 20 members of Britain’s Badger Trust who had come on the excursion to help inform their own conservation work.

In this case, the owners of the land are supportive of having beavers on their property.  But by the spring, the young beavers may move down the creek to another farm where the reception may not be so positive.

Ivory, the Perthshire farmer, said his strong preference is to trap problem animals and move them.

Scottish law doesn’t permit relocated beavers to be moved to another part of Scotland, so Campbell-Palmer — the “beaver lady” — says southern England is the next best option, such as the pond in Norfolk our CBC crew visited.

“I think it’s nearly 60 animals [in total] that I have moved over the last few years,” she told CBC News in an interview

However, English law forbids releasing beavers into the wild, so local ecologists spent years getting permits and then building a fenced enclosure around the beaver pond so they will remain contained.

“In the longer run, we want them to be free,” said Tosney, the Norfolk ecologist, but for now he’s pleased the beavers will have a normal life within the enclosure.

Ivory, the Scottish farmer, said he believes live trapping beavers is part of the solution, but it can’t be up to farmers to bear the full cost of living with the growing population.

“You know, there’s some people who say extermination and others who say they can’t be touched. My belief is somewhere in the middle.”

0 comments on “As beavers return to Britain, their presence becomes a gnawing problem”