As Montenegro turns on itself, its new government doubles down 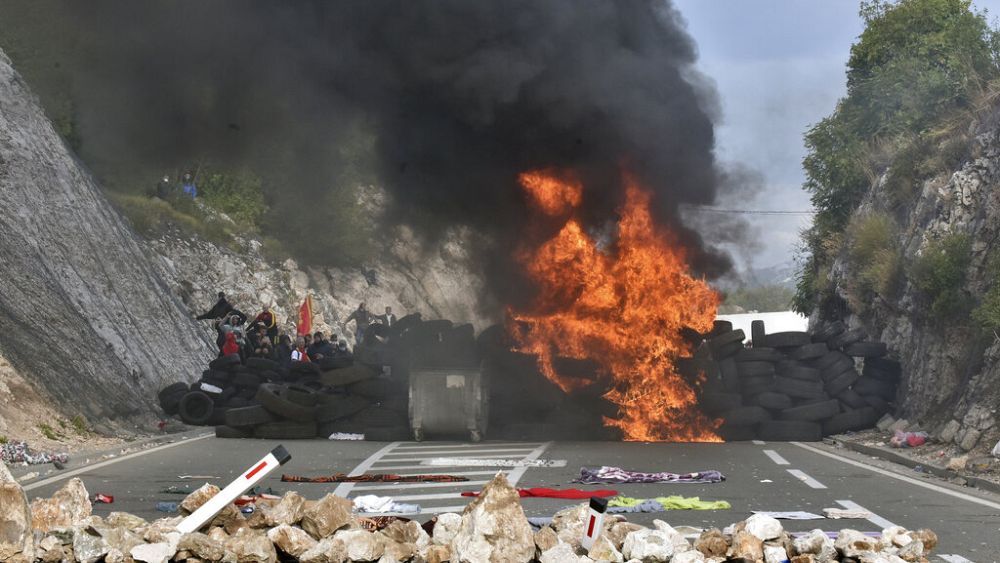 Once a haven of stability in the region that drew millions of Europeans to its beaches every year, Montenegro has been seen violent street protests and an increasingly toxic political climate that has put questions of ethnicity and religion back at the heart of Balkan politics.

Milan Knezevic’s Democratic Front had a reputation as the bad boys of Montenegrin politics even before the party entered government as part of an opposition coalition in 2020. Critics of the alliance dubbed the coalition “Vucic’s List” because of its close relationship with the Serbian president and Belgrade. Knezevic and his party opposed Montenegrin independence from Serbia in 2006.

But the reputation was cemented in 2016, when Knezevic and his Democratic Front colleague, Andrija Mandić, were implicated in a plot to overthrow Montenegro’s government with the help of Serbian and Russian agents and capture and kill President Milo Djukanovic, who has dominated Montenegrin politics since the end of the Communist era 30 years ago.

In 2017, Knezevic and Mandić were convicted by the High Court in Podgorica of conspiracy and terrorism, alongside 12 others including two alleged Russian agents, Eduard Shishmakov and Vladimir Popov, tried and sentenced in absentia. It was believed the coup was an effort to derail Montenegro’s ascension to NATO. Moscow has denied any involvement in the affair.

Knezevic denies the coup attempt, arguing that it was a conveniently-timed public relations exercise by Djukanovic, who faced losing the 2016 election and — largely due to the revelations — ended up with his Democratic Party of Socialists securing another majority. Knezevic and Mandić are currently appealing the five-year jail terms that they were given in 2017.

“I have never met either Popov or Shishmakov or any Serbian citizen who is accused of terrorism. […] I will be polygraphed. I have never staged any coup, not least in 2016,” he said. “It was fabricated.”

The elections that brought Knezevic to power in August 2020 were extremely close, with a governing coalition ultimately pulled together that combined pro-Serbian nationalists, environmentalists and progressives of wildly different political stances but united by a shared antipathy towards Djukanovic.

That antipathy, however, is very much by degree. The Democratic Front wants to see charges brought against Djukanovic for corruption and — ultimately — throw him in jail. Much of their efforts over the last year have been trying to remove Montenegro’s chief prosecutor, Milivoje Katnic, who they claim is blocking the courts from bringing charges against Djukanovic.

Katnic has previously told Euronews that he has no connection with Djukanovic and denied that he has been blocking pending corruption charges against the president and his family.

At the other end of the scale is United Reform Action (URA), a progressive green party that won just three seats in parliament and whose leader, Dritan Abazovic, is deputy prime minister. Abazovic has previously told Euronews that he objected to Djukanovic’s long tenure as leader (he has been prime minister four times and president twice) but stopped far short of wanting to see him in jail.

The reluctance has led to a decision on the past of the Democratic Front to reshuffle the government and remove obstacles to Katnic’s removal. The party needs 41 seats in Montenegro’s parliament to maintain its government, without the URA it would have just 38. Knezevic was reluctant to talk specifics, but if the parliament’s minority parties joined the coalition, the DF may have the numbers.

The Democratic Front claims that the removal of Katnic is about more than Djukanovic. A new chief prosecutor sympathetic to their cause would enable them to overhaul the entire justice system which, Knezevic claims, is full to the rafters of pro-Djukanovic and DPS judges. It would also undoubtedly help Knezevic and Mandić with their appeal over the 2016 coup plot.

But Djukanovic is only one man, and the mission to destroy the president — who faces elections in 2023 — is something of a sideshow for most Montenegrins. There is a far bigger debate going on in Montenegro since the new government’s election in 2020 than whether Djukanovic has used his position to enrich himself and his family, one of what it means to be Montenegrin.

Montenegro, a tiny country of 630,000 people, escaped the worst of the violence that tore the Western Balkans apart between 1991 and 1995 and when Slovenia, Croatia, Bosnia and North Macedonia gained their independence, Montenegro and Serbia formed the Federal Republic of Yugoslavia and Montenegrin forces fought alongside those of Slobodan Milosevic during the Balkan wars.

It remained unified with Serbia in 2003 when the FYR became Serbia and Montenegro, but by now Djukanovic had moved away from his former allies in Belgrade and was championing an independent Montenegro. In 2006, the country held a referendum on independence which was won by 55.5%, passing the 55% threshold required for a victory by the narrowest of margins.

In the years since Montenegro’s relationship with Serbia has deteriorated, culminating in Djukanovic’s attempt in 2019 to strip the Serbian Orthodox Church of its vast landholdings in the country. His decision led to street protests and galvanised the opposition ahead of the 2020 elections. When the opposition won, a protest organiser, Zdravko Krivokapić, became prime minister.

In 2021 it has been the government that has faced protests, this time from Montenegrins opposed to the power of the Serbian Orthodox Church. In September, hundreds took to the streets in Cetinje, a 15th-century city widely considered as the cradle of Montenegrin culture, to protest the appointment of a new head of the church in Montenegro.

What was supposed to be a historic event for the church turned into a farce, as Bishop Joanikije had to be flown by helicopter from the capital Podgorica to avoid barricades erected by protesters and was sworn in as tear gas and smoke hung in the air above the city. Protesters, who shouted “This is not Serbia” clashed with police and at least 80 of them and 50 officers were injured.

The footage from the protests has not done much to improve the reputation of Montenegro’s new government abroad, particularly at a time when it is seeking to reassure Brussels and Washington that it has not become a Serbian — or even worse, Russian — proxy state and is still determined to meet the requirements to join the European Union.

Neither have other scandals, such as when Justice Minister Vladimir Leposavic had to be removed from office in June 2021 after expressing doubt that the massacre of 8,000 Muslim men and boys by Serb forces at Srebrenica constituted genocide. Leposavic refused to apologise for the comments and was ultimately removed in a parliamentary vote, with 43 votes in favour and 27 against.

Knezevic was one of those who voted against, arguing that the furore was manufactured and that Leposavic’s comments were taken out of context. On the same day, he voted against a resolution to make July 11 a day of remembrance and mourning for Srebrenica. He argues that he is not against a national day of mourning, but it should be for all victims of the Balkan wars.

“We suggested that we have a day of remembrance for all victims from the region of the former Yugoslavia who perished and died in our wars,” he said.

“Srebrenica was a crime that has no justification. It has to be a serious warning for all of us to work on reconciliation and to heal wounds and seek justice […]. I won’t go into whether it should be treated as a genocide or not. There are lots of arguments around one or the other.”

More recently, the government has been embroiled in a row over Montenegro’s census, which was due to be conducted in 2021, ten years since the last census in 2011. Many in Montenegro feel that the census should be delayed given the growing fissures in Montenegrin society and the fears that revelations in it could further polarise an already deeply divided country.

There have also been calls to remove the requirement to state ethnicity, language or religious convictions on the census form. In a joint statement, the ambassadors of the UK and US warned that “certain political forces are cynically championing this initiative, hoping to drive a wedge between those who identify as Montenegrin and those who identify as Serb”.

But Knezevic is resolute: ethnicity, language, and religion are important questions that deserve to be on the census. He wants to be able to identify as being of Serbian heritage, as a believer in the Serbian Orthodox Church, and as someone who speaks the Serbian language – rather than the Montenegrin language which, he says, received undue favour under Djukanovic.

(In 2017, Montenegrin was officially classified as distinct from Serbian by the International Organisation for Standardisation. Most linguists agree, however, that the languages are almost identical.)

“In the US when they have a census they ask about nationality and religion, they also ask about sexual preferences. In the US all these elements are there, whereas here they want to stop the census and delete nationality or religious affiliation,” he said.

“The free expression of our citizens should not be stopped […] They should be free to say if they speak the Serbian language, follow the Serbian Orthodox Church, or declare themselves as Serbs.”

There are practical reasons too for holding the census before the end of 2021, he said, namely the allegations of voter fraud levelled by the opposition against Djukanovic and the DPS. These not only apply to the 2020 elections but go right back to the referendum, which was passed by a razor-thin – some would argue, a suspiciously thin – minority of voters in 2006.

Directly above his head as he speaks from his office in Podgorica, is another frame, this one containing a painting of Knezevic’s ancestors fighting the Ottoman Turks in the 1860s. Back then, Montenegrins fought alongside Serbs, and eventually threw off the yoke of Constantinople after almost four hundred years, Montenegro was recognised as an independent state in 1852.

“I respect the fact that Montenegro is an independent state. I have no reason to ever question that,” he said. “But it has become the private property of Djukanovic […] that was not what the people who voted for independent Montenegro had in mind.”

0 comments on “As Montenegro turns on itself, its new government doubles down”