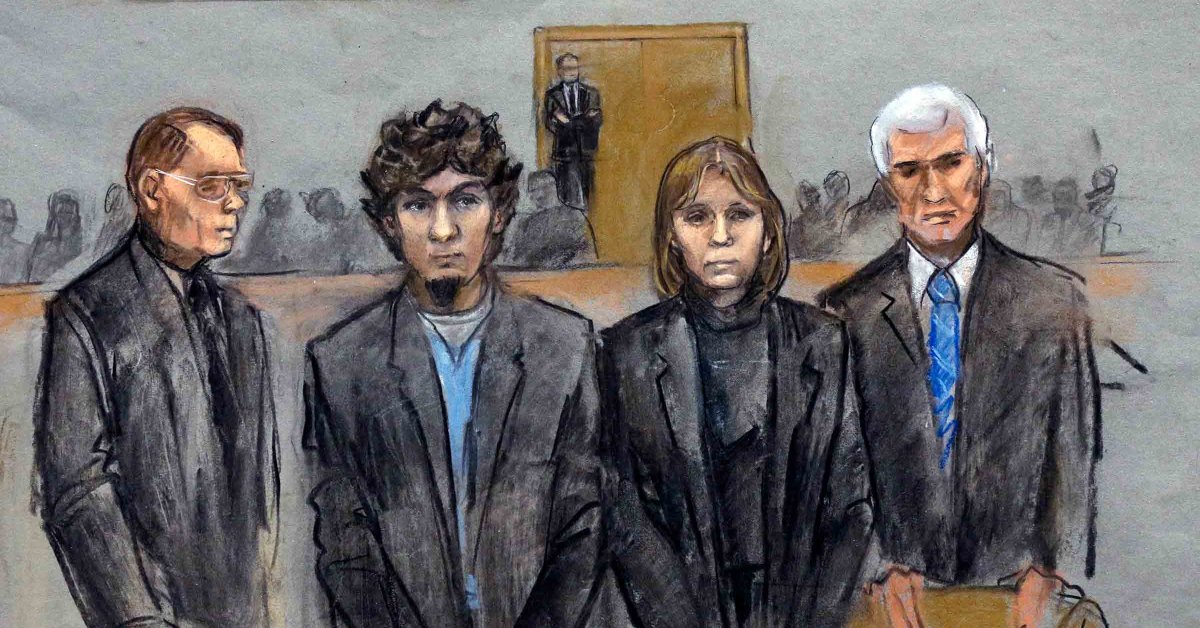 Attorneys will stand before the U.S. Supreme Court on Wednesday and argue the fate of one of the most infamous members of federal death row: Boston Marathon bomber Dzhokhar Tsarnaev.

While the case could have legal implications for future high-profile capital punishment trials, it also highlights a rift between Joe Biden’s campaign pledge to end the federal death penalty and his Justice Department’s request that the Supreme Court reinstate Tsarnaev’s death sentence.

Tsarnaev was sentenced to death six years ago for his role in the 2013 Boston Marathon bombing, which killed three and injured hundreds. In 2020, the 1st Circuit Court of Appeals threw out his death sentences, citing procedural failings during his trial (but kept in place his numerous life sentences). The Justice Department (DOJ) under President Donald Trump appealed in October of 2020, and then reaffirmed that position in June 2021 under Biden. The Supreme Court will now determine if Tsarnaev’s death sentences should be reinstated.
[time-brightcove not-tgx=”true”]

The case has brought renewed attention to the Biden Administration’s inconsistent positions on the death penalty. The first sitting President to oppose capital punishment, Biden pledged on the campaign trail to work to pass legislation eliminating the federal death penalty and to incentivize states to do the same. This year, he has spoken to lawmakers who have introduced legislation to abolish the practice, and in July his Attorney General Merrick Garland imposed a temporary moratorium on all federal executions that is still in place.

Yet Garland has not issued a formal policy banning federal prosecutors from seeking the death penalty, and in June, the Justice Department submitted filings to the Supreme Court asking for Tsarnaev’s death sentence to be reinstated. This means that while the federal government isn’t currently carrying out executions because of Garland’s moratorium, they are defending death sentences upon appeal and maintaining the ability to seek the death penalty in future cases.

In a statement in June about the Tsarnaev filing, White House spokesperson Andrew Bates said DOJ has “independence regarding such decisions” but said the President believes DOJ should “not carry out executions.” He added that Biden “has made clear that he has deep concerns about whether capital punishment is consistent with the values that are fundamental to our sense of justice and fairness.” When asked for comment in October, the White House pointed to Bates’ prior statement. The Justice Department declined to comment.

Thrown into relief by Wednesday’s infamous defendant, the gulf between Biden’s campaign promises and his DOJ’s actions appears especially stark. “This is a necessary, but also politically convenient divergence between the White House and DOJ,” says Elie Honig, a former federal and state prosecutor and CNN legal analyst. “It’s appropriate that DOJ make its prosecutorial decisions independent of the President… [But] DOJ does not operate in a vacuum. They are aware of political reality. It’s one thing to say, ‘I want to end the death penalty.’ It’s another to say, ‘We want to spare Tsarnaev.’”

Only an act of Congress can officially abolish the federal death penalty. A spokesperson for Rep. Ayanna Pressley, a Democrat from Massachusetts who introduced legislation earlier this year to do so, told TIME in a statement that she remains in ongoing conversation with the Biden Administration about ending the federal death penalty. Pressley also said in a statement that she was “deeply disappointed by the DOJ’s decision earlier this summer to move in conflict with the President’s campaign pledge by seeking to reinstate the death penalty in the Dzhokhar Tsarnaev case.”

Tsarnaev’s future remains in limbo. Even if the Supreme Court decides to reimpose the death penalty as DOJ has requested, he won’t be executed as long as Garland’s moratorium remains in place. And even if it is lifted, Garland himself would have to schedule an execution. “The federal government has proven that it’s perfectly capable,” says Frank Baumgartner, a professor of political science at UNC Chapel Hill, “of having people sitting on death row for decades and decades.”

Restoring the independence of the Justice Department

At the same time that he is seeking to restore Tsarnaev’s death sentence, Garland has taken steps to probe the prior Administration’s use of the federal death penalty.

On July 1, he issued a memo announcing a moratorium on all federal executions until a review of the DOJ’s execution policies and procedures implemented during the Trump Administration could take place. The move was a major reversal from the Trump Administration’s decision to resume federal executions in the summer of 2020 after a 17-year hiatus. In the last six months of Trump’s presidency, DOJ carried out 13 executions, the most civilian executions in a single year since 1896.

Read more: In a Year Marked By Death, the Trump Administration Cements a Legacy of Unprecedented Executions

In his July announcement, Garland directed the Deputy Attorney General to conduct a “multi-pronged” review of policy changes made during those Trump-era executions, including a review of the “risk of pain and suffering” caused by the execution drug pentobarbital and the speed at which executions were carried out. Advocates who want to abolish the death penalty have also been encouraged by news that federal prosecutors have withdrawn death sentence requests in at least seven cases this year, signaling a possible larger shift within the Department away from capital punishment.

Yet Garland has not issued a formal policy banning federal prosecutors from seeking the death penalty entirely. And the Department is still defending death sentences on appeal, such as Tsarnaev’s.

Garland’s actions could in part be attributed to his reputation as an institutionalist. DOJ faced fierce criticism during the Trump Administration for appearing to operate at the direction of the White House, blurring the historic line between the President and his Attorney General. One of Biden’s chief aims when he assumed office was to restore the DOJ’s reputation for independence. Generally speaking, Garland has defended the law as it currently stands while Attorney General, even backing Trump-era positions that might appear to run counter to Biden’s agenda. When it comes to changing controversial policies, he’s often left it up to Congress (with some exceptions).

“[DOJ is] not going to be pursuing a policy shift. That’s in the President’s hands to signal,” argues Miriam Krinsky, a former federal prosecutor and the executive director of Fair and Just Prosecution, a network of elected prosecutors that support criminal justice reform. “Until that happens, the Attorney General and the Department of Justice are likely to simply follow the pathway that’s been charted in individual cases,” she continues. “It’s highly unusual for the [DOJ] to reverse course in a case.”

Garland discussed his personal views on the federal death penalty during his confirmation hearing in February, explaining that even though he supported the death sentence of Oklahoma City bomber Timothy McVeigh while working as a federal prosecutor in 1997, he’s had “great pause” over the federal death penalty in the decades since over “the large number of exonerations,” “the increasing almost randomness or arbitrariness of its application” and its “disparate impact” on communities of color.

During his hearing, Garland said he would adhere to the President’s policy were he to issue a moratorium banning the DOJ from seeking any new death sentences, adding it is “within [the President’s] authority to put a moratorium on the death penalty in all cases.”

But Biden has yet to issue such a moratorium.

In January, just before Biden took office, Rep. Pressley and Democratic Illinois Sen. Dick Durbin introduced legislation that would abolish the federal death penalty. Biden has not publicly commented on that legislation, but Pressley tells TIME in a statement that during a visit to the White House the President gave her “his word that no person in America would be executed by the federal government on his watch.”

Progressives like Pressley have called on Biden to take it a step further and use his authority to commute the sentences of all 45 people currently on federal death row. When asked in a July briefing about these demands, White House Press Secretary Jen Psaki said that she didn’t expect the White House “would speak to that” while the Justice Department conducted its review of execution policies and procedures.

Read more: Joe Biden Says He Opposes the Death Penalty. He Can Help End It With the Stroke of a Pen

Critics say Biden hasn’t yet used all the powers of the presidency to work to end the practice short of new legislation. While DOJ instituted a temporary moratorium on federal executions in July, Biden hasn’t commuted the death sentences on death row and has not issued a formal policy banning federal prosecutors from seeking the death penalty in the future—which Garland himself said in his confirmation hearings that the President has the authority to do. “I think that the President has options here if that was really a high priority,” says Brett Tolman, former United States Attorney for the District of Utah.

Politically, Harvard Law professor Carol Steiker says, “the position that Joe Biden took on the death penalty is not a super popular one.” A 2020 Gallup poll found that a majority of Americans—55%— support the death penalty for person convicted of murder. And a case like Tsarnaev’s puts people’s theoretical opposition to the death penalty to the test. People still remember the horrifying images of the Boston bombing, the victims who died and the many more left without limbs. “[Tsarnaev’s] a poster child for people who are for the death penalty,” says Honig.

But public opinion may be turning towards Biden’s position. Research by Baumgartner found that support for the death penalty is nearing its lowest level since the 1950s. Rob Dunham, the executive director of the nonpartisan Death Penalty Information Center, says every governor who has imposed a moratorium on capital punishment has been reelected, as have many local prosecutors who pledged to significantly restrict its use. “Capital punishment is no longer a wedge issue,” he says.

For now, the rift between Biden’s campaign promises and his Administration’s actions persists, and Tsarnaev’s fate remains uncertain.