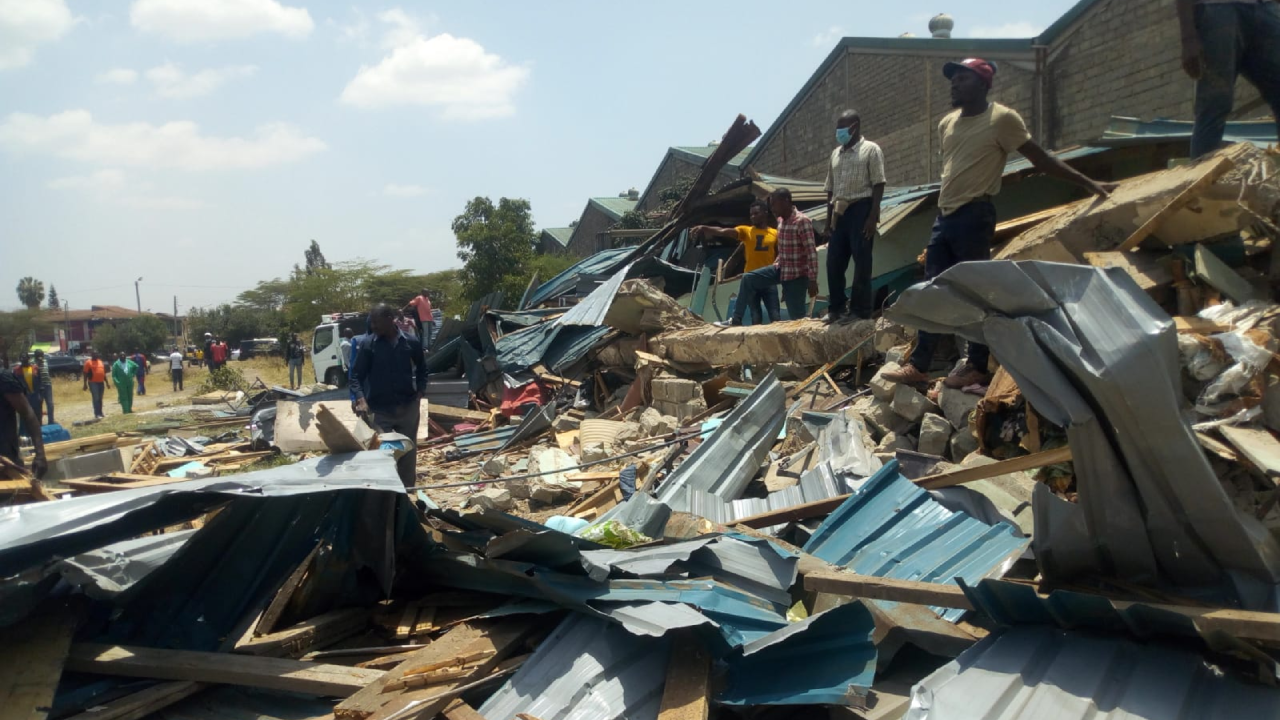 In the early morning hours of October 6, a school building on the outskirts of the Kenyan capital Nairobi, was demolished without warning. The perpetrators are yet unconfirmed, but local associations suspect a private company that has been part of a land dispute with the school since the 90s. This demolition is part of a larger phenomenon of public land insecurity in Kenya, with associations working to protect schools from encroachment and land grabbing.

Photos shared online show the razed remains of a workshop and classroom building at the Martin Luther Primary School, located in the Makadara neighbourhood. The workshop contained a carpentry studio which is used by some of the school’s 801 students, particularly the 66 of whom have special needs.

School officials report that the building, as well as its contents, were brought down without notice, destroying desks, computers and other equipment that was inside.


Photos posted on Twitter October 6 show the remains of the Martin Luther Primary School workshop building after being demolished in the night.

A bulldozer was accompanied by security guards who looked on.

Part of Nairobi county public School Martin Luther Primary including the school’s workshop have been demolished under the supervision of over 100 police officers and land surveyors were on the ground wakaweka beacons kwa the school’s playground.https://t.co/7NQFU0gdiZ pic.twitter.com/c43rxE3NPA


Former governor of Nairobi Mike Sonko visited the site the morning of October 6, after the demolition took place.

Although local officials have not yet confirmed who was behind the demolition, community members have pointed the finger at Thabiti Enterprises, a private company that has laid claim to the land since the 90s.

According to Shule Yangu – a campaign that aims to protect schools’ land rights by securing title deeds for public schools, aligned with Transparency International Kenya – this is a textbook case of “land grabbing”, where developers or private entities take over public lands, often meet with a “culture of impunity” in Kenya.

‘The demolition happened outright against the law’

The demolition happened outright against the law. There has to be a court order for such structures to be pulled down, but there was no court order. There were police there supervising the demolition, but the local police were not aware of it. The private developers may have hired their own police to come and give them protection during the demolition.

Most of these demolitions do happen at night, for fear of being roughed up by the community. They take advantage of the fact that, with the Covid-19 pandemic in Kenya, no one is allowed to be roaming the streets at night and no local community came at night to rescue the school.

It was only a few structures of the school, but that’s just one way of encroaching into the school. Who knows. It’s a fight for a 5.3-acre piece of land, a big piece, so we can only imagine what kind of structure in the future they’d go for.

The demolition comes down to a land ownership dispute. Martin Luther Primary School does not have a title deed for the land it sits on, something that Birech says reflects “the vulnerabilities that all Kenyan public schools are facing”.

The land parcel dispute dates back to 1992, when Thabiti Enterprises filed a suit against the Nairobi City Council, which managed the land and school, for trespassing – building a fence and signpost on a portion of land to which they laid claim. The case went back and forth on appeals for more than two decades, and was eventually dismissed in 2015.

According to public records, the state allocated a parcel of the school’s land to the company in 1986, even though city officials had requested it be officially allocated to the school, which had used the land for decades and already built a workshop there, instead.

The FRANCE 24 Observers team was unable to reach Thabiti Enterprises for comment.

Shule Yangu has called for the school to be issued a title deed for the entirety of its property “according to the survey plan and demarcations” which had been conducted in 1956, and which allocated the land to the school.

Despite progress made since Shule Yangu began operating in 2015, 56% of public schools in Kenya still do not have official ownership of the land their students use every day.

The system also suffers from a lack of consistency, with as many as 42 different laws having dictated public land allocation and countless stakeholders involved in the process. Even owning a title deed in Kenya does not necessarily protect from land grabbing, as corruption has led to land record fraud.

Over the years, schools in Kenya have been encroached on by building projects including roads and commercial buildings.

Shule Yangu began in 2015 after a developer attempted to seize the playground at the Langata Road Primary School in Nairobi, erecting a perimeter wall to keep children out of the play area. Students who protested against the incident were tear-gassed by police.

>> Read on The Observers: Kenyan children tear-gassed while trying to reclaim playground

Due to financial constraints that most communities face in Kenya, the only available option for some children to access education is through public schools. If one school in a village is brought down, children will have to go a long distance to get to another school. When students have to wake up very early in the morning and walk far to get to school on time, you never know what may happen. In terms of education inequality, the gap is widening between those who are able to attend private schools and the ones who are not. Students attending private schools can just continue with their education.

Some new policies have made moves at consolidating and simplifying the land ownership system, making title deeds easier to attain, and protecting public spaces, but the jury is still out on the impact these changes will have.

National directives in 2015 and 2018 were passed in order to compel the Ministry of Lands to issue schools with title deeds, but little progress has been made so far.