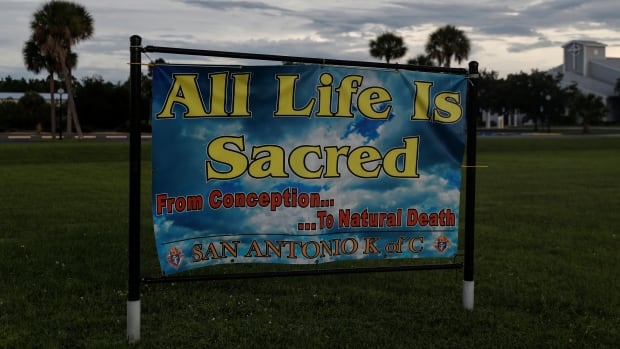 A Florida Republican lawmaker has filed a bill that would ban abortions after six to eight weeks and allow members of the community to sue doctors for terminating pregnancies in what may be the first effort to mirror a similar new law in Texas.

The bill by state Rep. Webster Barnaby would ban abortions after regular cardiac contractions are detected in an embryo, known as a fetal heartbeat even though the heart has not yet developed, about six to eight weeks into pregnancy. That is before many women know they are pregnant.

The bill was immediately condemned by proponents of reproductive rights.

The Texas law and the Florida bill are the latest in a decades-long string of efforts by Republican officials to limit or ban abortion in conservative states.

The right to abortion was established in the U.S. Supreme Court’s landmark 1973 Roe v. Wade decision, but abortion-rights advocates fear it could be overturned when the court, now with a 6-3 conservative majority, hears a bid by Mississippi or other states to overturn that decision.

Barnaby’s bill, which was filed for consideration in the Republican-controlled legislature next year, is similar to the Texas measure in that would ban abortion after the so-called fetal heartbeat is detected and allow abortion opponents to sue doctors and their employees for $10,000 US for terminating pregnancies.

The Texas law is more restrictive, with no exceptions for rape or incest, and it can be interpreted to allow lawsuits to be filed against anyone who helps a woman obtain an abortion, such as taxi drivers or friends who might give her a ride to the doctor.

The Florida bill makes exceptions for rape, incest and medical emergencies that threaten the life of the woman.

The Texas law, the most restrictive in the country, took effect on Sept. 1 after the U.S. Supreme Court declined to act on a request by abortion-rights groups to block it.

It was a victory for conservatives, who have long sought to eliminate abortion access in the United States.