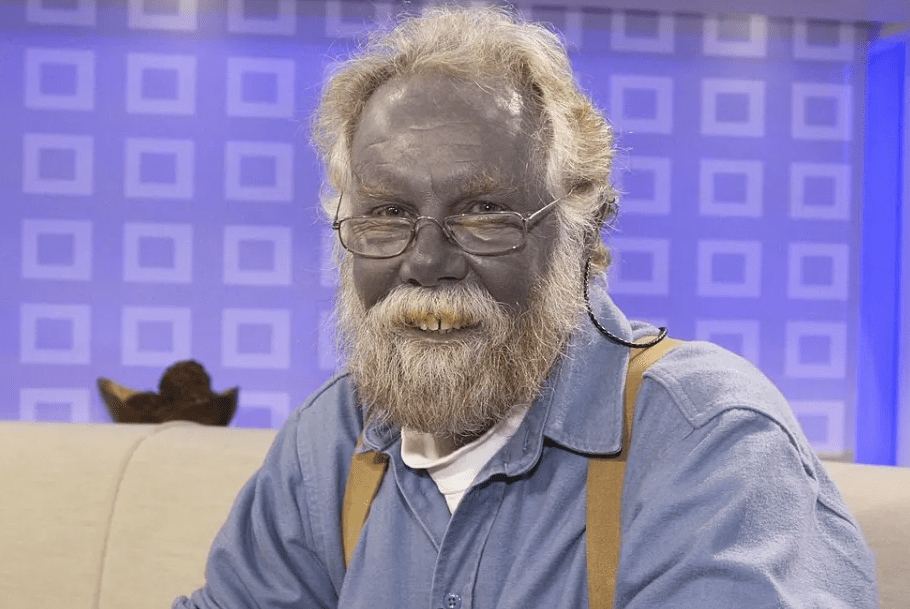 A REAL life “Papa Smurf” was left with blue skin and a white beard after drinking liquid silver right up until his death aged 62.

Paul Karason died in an Oregon hospital on this day eight years ago due of a heart attack – but the incredible pictures of his unique looks continue to circulate online.

Paul was reportedly rushed to hospital a but later caught pneumonia and suffered a severe stroke, his estranged wife Jo Anna Karason told NBC Today at the time.

The 62-year-old shot to fame in 2008 when he appeared on the Today show to discuss the condition that turned his skin blue, known as argyria.

It was a side effect from drinking a silver compound for more than a decade to treat a bad case of dermatitis on his face.

His blue complexion earned him the nickname “Papa Smurf” and he was said to be an admirer of the term.

Speaking with Today, Jo Anna said: “If it was a kid who ran up to him saying ‘Papa Smurf,’ it would put a smile on his face. But if it was an adult, well…”

According to news outlet, Paul produced his own silver, which he dissolved in water and drank every day for 10 years.

Silver has antibacterial properties and had been used to fight infection for thousands of years but went out of use when a far-more potent medicine – penicillin – was developed in the 1930s.

It continued to be sold in some over-the-counter medicines until 1999, when the FDA, the US’ drug regulator, banned it because it was causing argyria.

The rare skin disease occurs when silver builds up in your body over a long period of time, turning your skin, eyes, internal organs, nails and gums a blue-grey colour, which becomes more pronounced when exposed to sunlight.

Paul was born a fair-skinned, freckled boy with reddish blond hair but began taking collodial silver – a suspension of silver in a liquid base – in 1998 after seeing an ad in a new-age magazine promising health benefits.

He guzzled about 10 ounces a day of the home-brew and began to develop a blusish tinge, which stood out thanks his plush white beard and hair.

“And he looks at me and he says, ‘What have you got on your face?

Sadly, Paul didn’t even realise his skin was turning blue until an old friend came to visit.

He said: “And he looks at me and he says, ‘What have you got on your face?’ ‘I don’t have anything on my face!’

“He says, ‘Well, it looks like you’ve got camouflage makeup on or something.’

“And by golly, he came in and he was very fair-skinned, as I used to be. And that’s when it hit me.”

He also began noticing changes to his health.

“The acid reflux problem I’d been having just went away completely,” he said.

“I had arthritis in my shoulders so bad I couldn’t pull a T-shirt off. And the next thing I knew, it was just gone.”

Paul said “there’s not the slightest doubt in my mind” that colloidal silver had cured him.

He had a long history of other health problems, and was known to be a heavy smoker, despite undergoing a triple bypass surgery about five years before his death, his estranged wife said.

“He has been too ill to work for a while,” she said, saying Paul spent his last few years reading historical books and watching the History Channel.

“He didn’t like to go out in public much — only when he thought he needed to, like to go to the bank or to pick up tobacco,” she said.