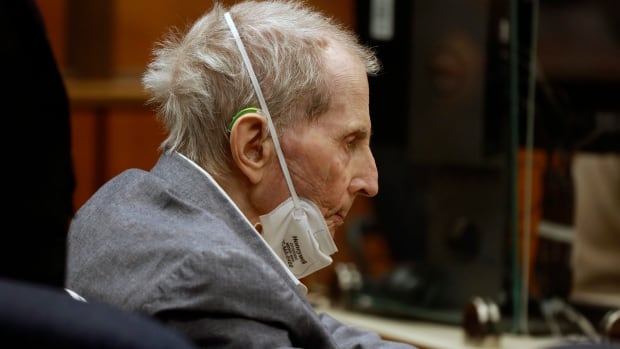 New York real estate heir Robert Durst was sentenced Thursday to life in prison without chance of parole for the murder of his best friend more than two decades ago.

Durst, 78, was convicted in Los Angeles Superior Court last month of first-degree murder for shooting Susan Berman point-blank in the back of the head at her home in December 2000.

Durst silenced Berman to prevent her from incriminating him in the reopened investigation into his wife’s 1982 disappearance in New York, prosecutors said.

Durst testified that he didn’t kill either woman, but said on cross-examination that he would lie if he had.

Prosecutors also presented evidence that he intentionally killed a neighbour in Galveston, Texas, in 2001, though he had been acquitted of murder in that case after testifying that he shot the man in self-defence.

Durst is the grandson of Joseph Durst, who founded the Durst Organization, one of Manhattan’s largest commercial real estate firms. His father, Seymour, took the reins of the company and later handed control of it to a younger brother, Douglas.

Robert Durst settled his share of the family fortune and was estimated by prosecutors to have $100 million US.

His lawyer, Dick DeGuerin, said they plan to appeal and refrained from making other remarks during sentencing.

Judge Mark Windham denied a motion for a new trial, rejecting arguments there was insufficient evidence or that he had erred 15 different ways in prior rulings.

“You said the court erred so many times it made me feel self-conscious,” Windham joked.

He said prosecutors had overwhelming evidence that proved Durst’s guilt beyond a reasonable doubt at least five ways, including a devastating cross-examination of Durst on the witness stand and an admission Durst made in the climax of the six-part documentary, The Jinx: The Life and Crimes of Robert Durst.

The trial came six years after the apparent confession was aired. Durst, who was still wearing a live microphone after an interview, went into a bathroom and said to himself, “What the hell did I do? … Killed them all, of course.”

Lead prosecutor John Lewin, who had pursued Durst for years, credited The Jinx filmmakers Andrew Jarecki and Marc Smerling for their revealing interviews, which helped make a case against Durst.

Durst’s trial began in March 2020 and was adjourned for 14 months as the coronavirus pandemic swept the U.S. and courts were closed. It resumed in May with the jury that reached its verdict Sept. 17.

Berman, the daughter of a Las Vegas mobster, was Durst’s longtime confidante who was preparing to tell police that she had provided a phony alibi for him after his wife vanished in New York in 1982.

Her family had hoped to present statements to the court Thursday about their loss, but prosecutors denied the request, according to emails sent to their lawyer.

Attorney Robert Abrams, who showed up at the hearing. said the McCormack family was disappointed, and he was outraged.

“The family is not going to go travel 3,000 miles to be a prop in some Hollywood production and sit there and not be able to make their victim impact statements,” Abrams said. “This is not some movie where it’s gross spectacle. This is their lives, and they’ve suffered for 40 years.”

Deputy District Attorney John Lewin, Kaufman and others pleaded with Durst now that he’s unlikely to be freed to tell the McCormack family where she was buried.

“I hope in your final days and hours you will … give the McCormacks what little they are asking for: to find Kathie, to lay her to rest appropriately, finally and at long last,” Kaufman said. “This is the most important question that still haunts us.”