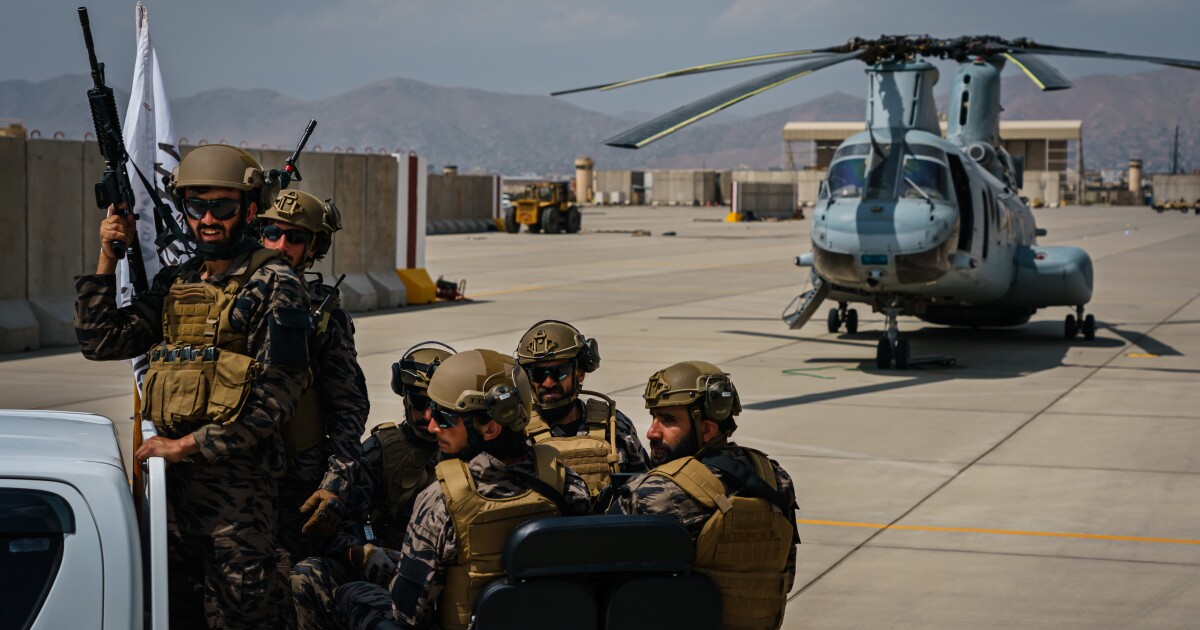 For the last two weeks, Kabul’s Hamid Karzai International Airport was the last tether for America’s war in Afghanistan, its runways the site of a frantic airlift that spirited more than 123,000 people out of the country.

But there was none of that frenzied activity Tuesday, hours after the last U.S. military transport plane rumbled into the night sky, closing the chapter on a 20-year U.S. intervention that ended the way it began: with the Taliban in control of Afghanistan.

The militant group was eager to crow over its victory.

“In the last 20 years, the world was united against us — more than 40 nations against us while we had no one,” said Anas Haqqani, a senior Taliban negotiator whose brother leads the Haqqani network, which the U.S. deems a terrorist organization. “We gained this freedom, independence and conquest with the support of God.”

Standing among a crowd of journalists and admirers, he wore stylish Lacoste glasses and spoke in measured tones before a row of attack aircraft while basking in the protection of stern-faced fighters from the Fateh Zwak or Badri 313, the Taliban’s elite fighting squads. It was a 21st century photo op for a group with notably medieval views, especially regarding women and public morality.

The celebratory gunfire that rent the air in the first hours after the final U.S. departure had given way to a more subdued atmosphere, closer to the mood in Kabul at large, where Afghans waited — many in fear — to see what their new rulers have planned for them. The Taliban has pledged to revive Afghanistan’s fortunes but faces daunting challenges, including a suspicious populace, a brain drain of serious proportions and a crippling lack of funds.

The group’s leaders tried again Tuesday to broadcast a message of reconciliation to their compatriots. At a news conference, Taliban spokesman Zabihullah Mujahid exhorted Afghans to “transcend” differences and “stand united” to make Afghanistan stable enough to attract desperately needed aid and business.

“We have been reeling for 20 years under occupation and suffering,” he said. “You all are our countrymen, fellow brothers and citizens.”

Yet many do not believe that message, including Fawzia Koofi, a prominent female politician and former member of the fallen government‘s negotiating team who escaped on the last evacuation flight to Qatar. Koofi said the situation had reached a point where “many felt unsafe to continue [to] live” in Afghanistan.
“Taliban, hear us out: we must rebuild together!” she warned on Twitter. “This land belongs to all of us.”

In many ways, Kabul’s now-empty airport is an emblem of the precarious future Afghanistan faces with the West fully gone. Haqqani said confidently that, in the coming days, the airport would be back in operation and commercial activity humming again “once we’ve fixed the technical matters.”

But that will be far easier said than done. In the mad dash for the exit by the U.S. and its allies, a facility that cost billions of dollars to build has been reduced to little more than a chaotic trash heap.

Walking up to the airport’s civilian terminals Tuesday meant navigating past razor-wire cordons and overturned vehicles set up as a makeshift roadblock, with dozens of spent bullet casings tinkling underfoot. Tunic-wearing Taliban fighters roamed near a forlorn-looking Ariana Airways jetliner parked to the side.

Outside the domestic terminal, where a giant picture of former President Ashraf Ghani — who fled Kabul on Aug. 15, the day the capital fell to the Taliban — still stared imperiously out at the runway, there were stacked boxes of drinking water, coloring books and food packs that had been distributed to the thousands of people who had mobbed the airport in a bid to escape.

Inside the deserted terminal, the whir of air conditioning in the computer server room was the only sign that this had been an operational facility not so long ago. Up in the airport’s control tower, a drawer overflowed with packets of Splenda and NutraSweet, and a cabinet was crammed with peanut butter, canned corn and a giant jar of whey. But the consoles were dark and the instruments silent.

On the the military side of the airport, pickup trucks, Humvees, armored SUVs, forklifts, tow trucks, ATVs and rhino-like Oshkosh mine-resistant vehicles were haphazardly parked everywhere. Many had no keys. Some Taliban fighters stood hunched over the engines or tried to hot-wire every vehicle they saw. Others grabbed whatever bicycle or tricycle they found nearby; many had flat tires but fighters rode them and pedaled awkwardly across the base.

A nearby gravel field had been turned into a dump for M4 rifle parts, including barrels and stocks, as well as several abandoned sets of tracked military robots normally used for reconnaissance.

Hangar after hangar revealed the ravaged remains of what had once been the Afghan air force, which the U.S. and its partners had spent about $8.5 billion building and equipping and which was supposed to give Afghan troops a vital edge against the Taliban.

In one hangar, A-29 Super Tucano turboprop attack aircraft sat among piles of surplus uniforms and backpacks. Some of the planes had had their wings cracked at the joint or control surfaces sabotaged to render them useless. Black Hawk helicopters — which had been supplied at great expense and were once instrumental in defending outposts from the Taliban— had been left full of gaping holes, or had their noses exposed and their innards ripped out.

The worst was a hangar containing a scrum of MD 530 light attack choppers, many of them with their joysticks cut at the tip and their fuselages bumped up against one another to maximize inconvenience.

“Americans have destroyed the airplanes. They destroyed everything,” said one Taliban member who gave his name as Ahmad. “It will take a long time to fix — a lot of time and investment.”

Still, among the victors the mood was jubilant. Two Taliban fighters bristling with U.S.-supplied camouflage uniforms and M4 rifles sat on a pair of swivel chairs and examined what was now their domain.

“All of our politicians supported the invaders,” said another Taliban member, Abdul Hadi, who stood nearby.

He gestured toward his comrades. “These are the real heroes. And we believe they’ll make Afghanistan better.”

Many Afghans aren’t so sure, especially the thousands who had worked alongside the U.S. and its allies and who were not among the lucky ones who got out before the airlift ended. Through their bitterness at being left behind, many still wonder whether they can find a path abroad.

Although the U.S. Embassy had “suspended its operation,” an email it sent out Tuesday said it would continue helping permanent residents and other Afghan allies seeking to leave.

“Our commitment to the people of Afghanistan is enduring,” it said.