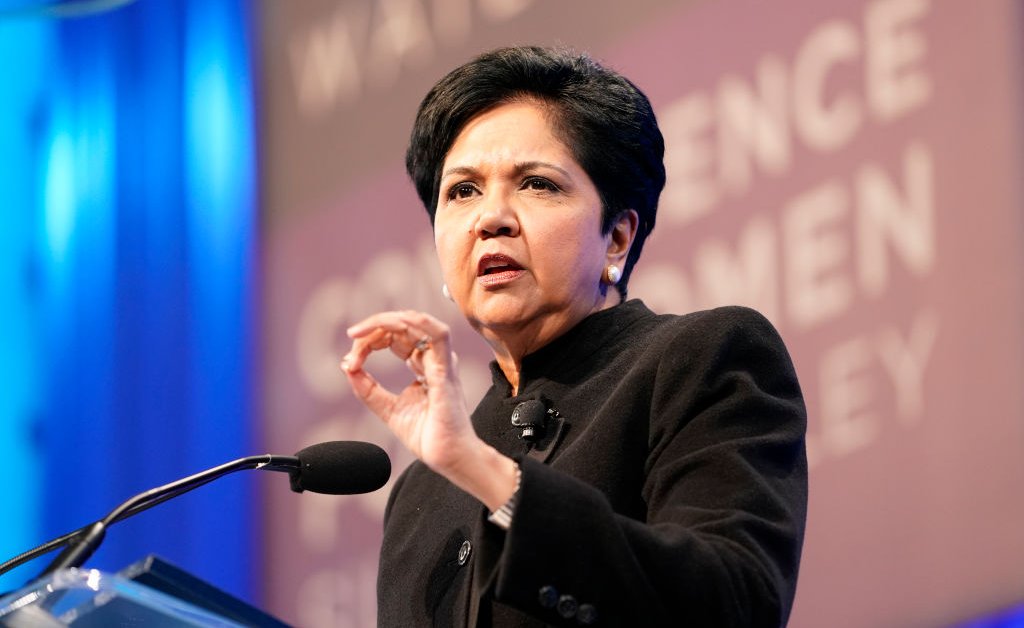 Indra Nooyi struggles to be heard over the sounds of outdoor dining, midtown traffic, and a fountain gushing down the wall. That’s clearly rare for the former PepsiCo CEO—so she beckons the restaurant’s owner and asks if he can shut off the water.

He obliges, and Nooyi proceeds to regale us, a table of female journalists at the helm of various New York media, with anecdotes from her just-released book, My Life in Full: Work, Family, and Our Future.

The whole lunchtime interaction—assess problem, determine what’s in your control, improve outcome, go forth with grace—is signature Nooyi. Her book delves even further into this exacting style punctured by compassion, loyalty, and deep relationships that get results.
[time-brightcove not-tgx=”true”]

I confess to having studied Nooyi for a long time now. I’ve watched her interviews, live and on YouTube, during my own career trajectory. A manager training I once attended spent hours dissecting Nooyi’s ability to peer around corners and lead a company through change. Then there’s the South Asian connection: a member of our own community ascended to a Fortune 50 company who proudly credits her childhood in Chennai and the role of extended family in making it all possible. For years, my people proudly (and wrongly) asserted that the 65-year-old executive wears a sari in the boardroom.

Thankfully, her book debunks the myth: After feeling like a misfit in oversized polyester outfits, she chose the traditional Indian dress for an internship interview, landed the job, and donned the sari for the rest of the summer. Eventually, she transitioned to Western attire, and her sartorial choices gained style and confidence as her career progressed.

Read more: A Woman of Color Cannot Save Your Workplace Culture

Back stories like that are the hallmark of this part memoir, part clarion. We’ve heard a lot from Nooyi over the last two decades, talks distilled into tweetable headlines and soundbites on work-family balance. As a woman of color, a mother of two girls, an immigrant success story, she describes feeling almost a moral obligation to show up at speeches, panels, awards ceremonies, seminars, and guest lectures during her 12-year tenure as CEO. Life in Full stitches it all together and offers the context sometimes only possible in hindsight.

The fast-paced narrative is as much a blueprint to getting ahead at work as an appreciation of the friends and family along for the journey. I found seven themes in particular surfaced repeatedly, together buoying Nooyi’s remarkable life:

Perhaps in all the reams written on the juggle, especially for women, the part that often feels shafted is the work itself. Nooyi’s love of the job—from walks on factory floors to battles with activist investors—is so apparent and infectious. Anyone who has fist-pumped after an excellent quarter or convinced a supervisor to implement their strategy will love the gusto with which Nooyi both throws herself into the work and celebrates wins.

She also uses wonky but relatable examples to explain how to predict and embrace change in the bigger picture. Nooyi recounts walking into supermarkets and Walmarts to assess Frito-Lay packaging and placement on shelves and watching parents and kids at birthday parties shunning soda as precursors to PepsiCo’s focus on healthier products. She also remembers working long hours and skipping vacation to dive into the guts of a billion-dollar-plus proposal to overhaul enterprise software, and why it is so important for leaders to understand all aspects of what they are approving.

Sharing the love of the work with the ones you love feels necessary and important, especially for children to understand why their mom is away: She loves you, but she also loves her work.

It’s okay to talk about your family at work.

Similarly, Nooyi seemingly effortlessly centers family in the workplace. There are subtle but important examples; for years, she kept a dry-erase board in her office just for the kids. Everyone from her bosses to her assistants helped in times of crisis, such as by offering to do school pickup.

There are also the ways Nooyi recognized the families of her staffers. She recounts writing letters to the parents of colleagues to thank them for their role in their child’s stellar performance. These “report cards,” she says, were beloved and drew loyalty from staff and their families. She also thanked the spouses of her direct reports, and notes, “these letters released a lot of emotion.”

Over and over, Nooyi finds herself in jobs or situations where she lacks expertise in an industry or product. It’s how she responds, also over and over, that is so brilliant. She doesn’t BS her way through presentations; she turns to experts.

Nooyi matter-of-factly mentions that after she went to Motorola, two community college professors came twice a week to her office, one to explain how automobiles work and the other to discuss “solid-state physics and electronics.”

You see how this instinct serves her well over time as she moves to PepsiCo. There, she turns to experts in design, science, and technology. Eventually, she hires a chief scientific officer, saying the role can help reduce salt in chips and add whole grains to Cheerio’s. But more importantly, she says, “science could be at the heart of reimagining the global food system.”

Men have a role to play.

At critical junctures in Nooyi’s career, men have preemptively jumped in and offered their support. When her father was dying, one boss offered six months paid leave. Importantly, the men initiated such support, she says, because “as a young consultant, I had zero leverage in asking for any kind of benefit that would help me through a difficult time.”

When she was pregnant and working as a consultant, she recounts: “For my last meeting with Trane, Bill Roth, the CEO, chartered two planes to bring his entire executive team to our offices in Chicago. The meeting would typically have happened in his own boardroom, but I was nine months pregnant and couldn’t travel. Bill wanted me to be part of BCG’s final presentation to his company.”

You can sense their immense respect for her at the root of the life-changing gestures. But imagine if such accommodation were the norm and not the exception. Would more women stay in the workforce?

Similarly, Nooyi praises her father-in-law and husband for their lack of adherence to Indian tradition around gender roles. After marriage, her father-in-law said to her: “Indra, don’t give up your job. You have all this education, and you should use it. We will support you in any way we can.”

Leave the crown in the garage.

Nooyi repeatedly says being a mother is one of her most cherished roles. But one night, after being named president of PepsiCo, she comes home and her mother orders her to go get milk. Nooyi is annoyed, feeling like she can’t even revel in this newfound title and success. Her mother responds: “You may be the president or whatever of PepsiCo, but when you come home, you are a wife and a mother and a daughter. Nobody can take your place. So you leave that crown in the garage.”

Such humility might not be expected of men, but Nooyi accepts this as a small price to keep peace on the home front. Another subtle point in the anecdote: Nobody will be as honest or hard on you as your mother.

Care needs to be prioritized by everybody right now.

While the brunt of the book dwells on Nooyi’s journey, she issues a call for action—rooted in deep study of states, companies, and countries with more family-friendly policies— for both prioritizing and training care workers like never before. Both in the book and in her lunch with journalists, Nooyi cites concern about two related crises. Women leaving the workforce and choosing not to have children, she says, will be disastrous for the economy, citing Japan as an example of our potential fate. She writes: “We must expand the future-of-work conversations that dwell on robotics and artificial intelligence to include another critical dimension of our success: how to shift our economies to better integrate work and family and ensure that women get equal pay and share power.”

I have written reams during the pandemic on how purpose is the single most important motivator for the modern workforce. Nooyi was early to this trend. Her transformation of PepsiCo rested on a concept called “Performance with Purpose.” She writes: “PwP would transform the way PepsiCo made money and tie our business success to these objectives: Nourish. Replenish. Cherish.” Purpose translates, thus, not just to business objectives but life itself.

Over the last year, retirement from PepsiCo a distant memory, Nooyi was working endless hours on a Covid task force. Her mother—the same woman who’d once said to leave the crown in the garage—seemed to have a change of heart. The need for home and work to accommodate each other might be more needed than ever. “You are someone who wants to help the world and not many people are like you,” her mother said. “I don’t think you should worry about the house so much. You have to give back as much as you can.”

0 comments on “The Seven Secrets of Indra Nooyi’s Success”