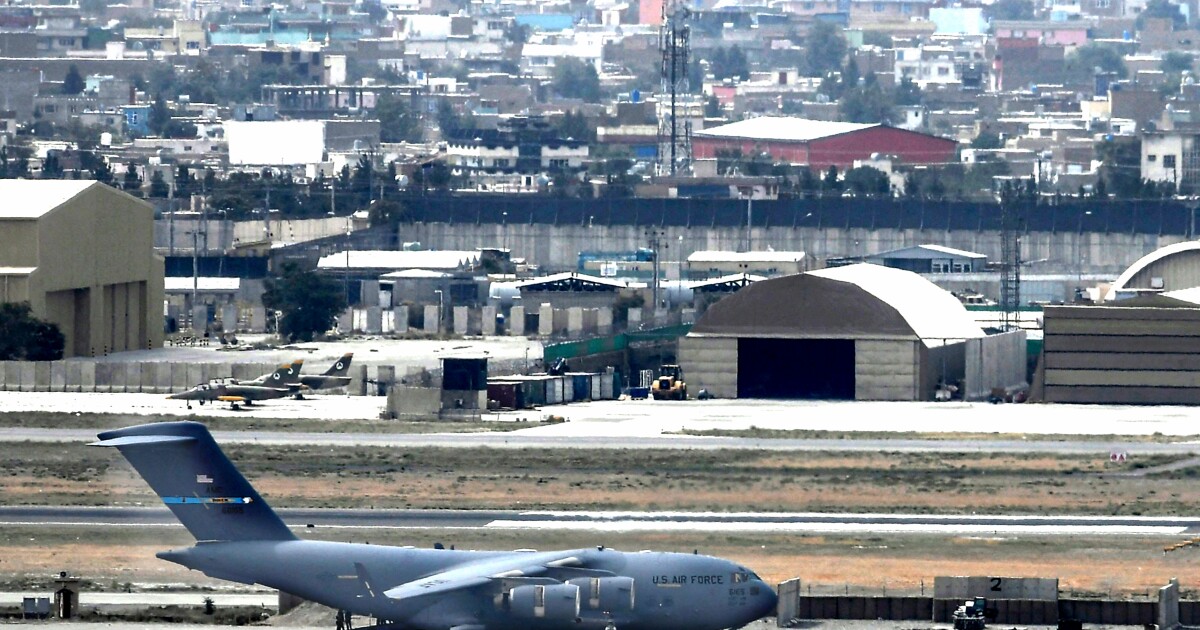 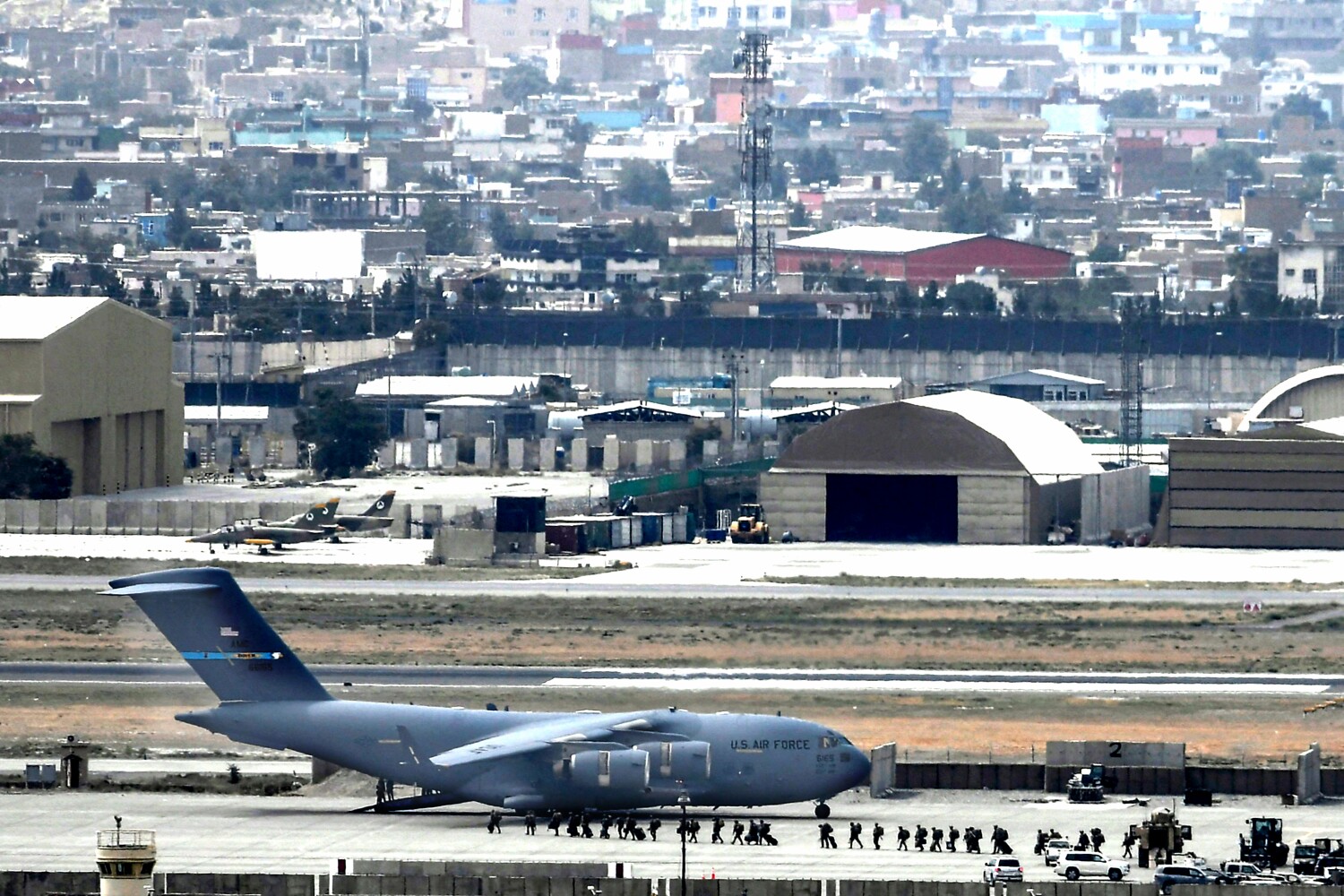 With the roar of a U.S. military cargo plane lumbering into the night sky over Afghanistan’s Taliban-held capital, the last U.S. troops departed the country at almost the stroke of midnight Monday, ending America’s longest war and leaving lasting but disparate wounds that cut across two nations.

The momentous final scenes played out in darkness. But Tuesday’s first light marked the dawning of incontrovertible knowledge: Afghans had once again been delivered into the hands of the Taliban, the medieval-minded Islamist group that horrified the world with its cruelties before being toppled in the 2001 U.S.-led invasion.

In a gesture by the Biden administration that was perhaps intended to bring closure to Americans but instead bestowed a bitter aftertaste of defeat, the final U.S. withdrawal came a dozen days before the 20th anniversary of the Sept. 11 attacks carried out by Al Qaeda, which used Afghanistan as a staging ground.

Death stalked and circled until the very end. In a war that cost the lives of nearly 2,400 U.S. service members, a final round of bloodletting came Thursday in the form of a suicide attack by Taliban rival Islamic State that killed 13 young troops and left more than 170 Afghans dead.

So long did this war last that to many, if not most, Americans, Afghanistan had slipped in and out of consciousness, like a disappearing Instagram story, until it was all but forgotten.

The war was eclipsed by the 2003 U.S. invasion of Iraq, its aims morphing and muddying with passing years. It wore on amid a dramatic shift in American politics marked by rancor and division that led to the election of President Trump, who in 2020 signed a deal with the Taliban to pull out U.S. troops. The move undercut Afghanistan’s fragile government.

The conflict tested four American presidents, left thousands of soldiers maimed, plowed ahead even after the death of Al Qaeda’s chieftain, Osama bin Laden, and marked the latest devastating blow to the image of an America that believed itself a force for good in the world. That reckoning is still resonating at home and abroad, a stark reminder that U.S. forays into other lands often have lasting consequences — and end with a degree of humiliation.

For Afghans, the war brought countless fresh graves and frequent doses of abject misery. But also, notably in Kabul, the U.S.-led military presence heralded a generation of economic opportunity and freedom — especially for women, who came out from beneath burqas to work as journalists, teachers and human rights activists. All this is now in jeopardy, even as the Taliban attempts to convince the world that it will not rule as before.

Like much of the war, this denouement was a long time coming but unfolded in a headlong rush.

The leader of the U.S. Central Command, Marine Gen. Kenneth F. “Frank” McKenzie, said the last liftoff of an American military aircraft came one minute before midnight in Kabul — just before the start of Tuesday, the day set by President Biden as the deadline for the departure of U.S. troops.

Within moments of the final U.S. plane’s takeoff, Taliban fighters swiftly moved into Hamid Karzai International Airport, which had been the scene of a massive U.S.-led airlift that carried more than 116,000 people out of the country — and into uncertain lives — since the militant group seized power two weeks earlier in a quick but nearly bloodless offensive.

As if to symbolize the dizzying turnabout, the group’s foot soldiers surged onto the airfield wearing U.S.-supplied uniforms and carrying once-coveted U.S.-made weapons and gear such as night-vision goggles. They fired salvos into the air and shouted “Allahu akbar!’’

The final C-17 cargo plane to depart carried the commander of the 82nd Airborne Division, Maj. Gen. Christopher Donahue, and Ross Wilson, the acting U.S. ambassador, who stayed on at the airport after the embassy was shuttered two weeks earlier. Strings of tracers lit the sky as the last U.S. warplane — providing cover for the hulking C-17 below — flew toward the horizon, the sound of its engine fading.

Below, some of the arriving Taliban fighters appeared befuddled by their new domain; one walked up to a metal gate and fiddled unsuccessfully with the handle, then tried to bash it into submission. In cavernous hangars, the fighters unearthed odd finds: boxes of military MREs, or meals ready to eat, tool boxes and an especially large power saw.

One Taliban squad posed in front of an assortment of partially disassembled Chinook helicopters, calling for a Taliban cameraman to record the moment. The men lifted American M4 rifles into the air as they cheered.

Though facing daunting challenges of governance, the Taliban, its white flags scrawled with black letters, is fully back in control. Many Afghans fear for their future, despite assurances that the group will allow women to participate in public life and will not seek vengeance on those who opposed it.

Shortly before the final U.S. withdrawal, the United Nations Security Council called on the Taliban to follow through on promises to uphold human rights, allow people to leave the country if they wished and not allow terror groups to take root. But in a possible portent of a divided international response to the Taliban takeover, China and Russia abstained.

Taliban leaders gloated, painting the departure of the American “occupiers” as a glorious occasion for not only the group but its compatriots.

“Our country gained its full independence,” Taliban spokesman Zabihullah Mujahid, who only weeks ago emerged from the shadows and into the media spotlight, wrote on Twitter. “Praise and gratitude to God.”

The final hours of the U.S. presence were marked by tense, harrowing scenes as the effort shifted away from nearly two frantic weeks of evacuating U.S. citizens and Afghan allies to readying the departure of American troops and officials. Threats from Islamic State continued until the end, the Pentagon said.

Even with the U.S. departure deadline clearly telegraphed in advance, the velocity of the August offensive by the Taliban caught the American security establishment unawares. Over a span of weeks, provincial capitals fell like dominoes, with the Afghan army — U.S.-trained and -equipped at a cost of $83 billion but hollowed out by official corruption, low morale and maltreatment of recruits — putting up very little fight.

Whatever hopes the U.S. had for even temporary stability vanished as the Taliban reached the gates of the capital Aug. 15. Afghanistan’s U.S.-backed president, Ashraf Ghani, fled with a coterie of aides, and by nightfall, fighters were prowling the halls of the presidential palace.

The decades-long presence of the United States and its NATO partners was punctuated by hopeful moments, with Afghanistan making strides in areas such as girls’ education, maternal health and life expectancy. But progress was fitful and uneven, with Kabul thriving and acquiring a cosmopolitan veneer while the hinterlands remained mired in poverty — and the Taliban plotted its return.

Perhaps the most criticized aspect of the hasty American departure was the abandonment of tens of thousands of Afghans who either aided the war effort by working directly with Western militaries or are in danger because of their work as activists.

“We did not get everybody out that we wanted to get out,” McKenzie acknowledged.

Secretary of State Antony J. Blinken said up to 200 U.S. citizens were not evacuated, either because they chose to stay or could not reach the airport. Despite the withdrawal, Blinken said, “America’s work in Afghanistan continues” — from a U.S. diplomatic mission temporarily relocated to Doha, Qatar — including providing humanitarian aid to Afghans and assistance to Americans and others in departing the country.

At the airport, near what had been the American-controlled sector, a lone mine-resistant armored protection vehicle sat awkwardly among the weeds. Taliban members took joyrides in armored SUVs left behind, honking as they barreled down the tarmac.

Much of the seeming bounty of war materiel at the airport was unusable, according to U.S. military officials. McKenzie said equipment left behind — dozens of mine-resistant vehicles, Humvees and aircraft — was “demilitarized,” meaning key components were damaged or destroyed.

After these chaotic weeks, the airport may regain some normal function. Though details remain scarce, Blinken said that Qatar, Turkey and others are exploring ways to maintain airport operations, making it possible for people to leave Afghanistan. Initially, only limited charter flights might be possible, given the lack of air-traffic controllers, maintenance crews and other essentials.

As so often happens when history takes a sudden swerve, the sweeping tumult of the American pullout suddenly gave way to the mundane.

At the airfield’s civilian entrance, a few families lingered, sitting near one another in the divider bisecting the main thoroughfare. Vendors slept by their roadside stalls.

Stragglers, mostly Afghan men, hefted an assortment of bags and backpacks, trudging back toward home.