U.S.-supplied arms are now the Taliban’s, but some disabled 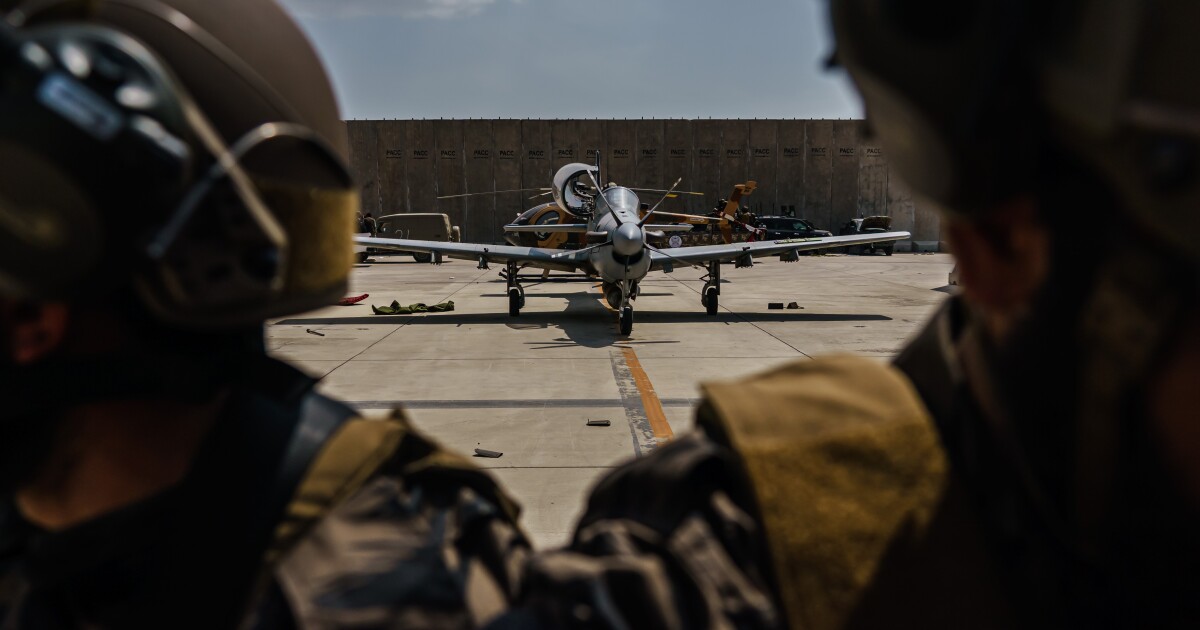 When Taliban fighters rode triumphantly into Kabul airport early Tuesday, they did so on U.S. pickup trucks, wearing American-made uniforms and brandishing American M-4 and M-16 rifles. Then they spent hours examining the bonanza of materiel that U.S. troops unintentionally bequeathed them in what had been the United States’ last redoubt in Afghanistan.

The group’s blindingly fast sweep through most of Afghanistan netted it billions of dollars’ worth of U.S. military equipment and weaponry given to the Afghan National Defense and Security Forces, which collapsed in the 11 days before the Taliban seized Kabul, the capital, on Aug. 15. Afghan soldiers who didn’t surrender shed their uniforms and gear and fled, following many of their military and political leaders.

“This is ghanima,” said one uniformed Taliban fighter: war booty. With a gloved hand, he snapped up the night-vision goggles on his ballistic helmet, looking like the very model of an Afghan soldier the U.S. had tried to help create to eliminate people like him. He walked inside a hangar and gawked with his squad mates at the U.S. Embassy helicopters gleaming under powerful overhead lights.

For their effort, Taliban fighters reaped almost 2,000 Humvees and trucks; more than 50 armored fighting vehicles, including Mine-Resistant Ambush Protection vehicles, or MRAPs; scores of artillery and mortar pieces; more than a dozen aging but working helicopters and attack aircraft; a dozen tanks; seven Boeing-manufactured drones; and millions upon millions of bullets, according to a list compiled by the Oryx Blog, which tracks weapons used in conflicts.

Many of the items had been disabled by departing U.S. troops or are beyond the ken of Taliban fighters to operate. But a bitter result of the chaotic Western withdrawal from Afghanistan is that the very group the U.S. ousted 20 years ago is not only back in power but better equipped militarily than ever before to repel adversaries and enforce its brand of repressive rule.

Less than a third of the $83 billion the U.S. spent on the Afghan defense forces went toward materiel, estimates say. That it now lies in the hands of the erstwhile U.S. enemy is a source of embarrassment for the Biden administration. Former President Trump, despite his administration’s talks with the Taliban that undermined the U.S.-backed Afghan government, inveighed in a statement Monday that “ALL EQUIPMENT should be demanded to be immediately returned to the United States,” along with “every penny” of its cost.

The arms have transformed the Taliban into a skewed version of the army the U.S. wanted the Afghans to have. One commander in the Taliban’s elite Fateh Zwak group proudly showed off the brown-gray pickups once used by the CIA-backed National Directorate for Security, the Afghan government’s intelligence service. The only thing different was the insignia.

Many of the fighters acted the part too, demonstrating what Dan Grazier, who served as a Marine in Afghanistan and is now a defense policy analyst at the Washington-based Project on Government Oversight, said was behavior suggesting they had once been part of the Afghan security forces that had been trained by Americans.

“The stance, the way they’re holding the rifles, the trigger finger, how’s it’s flat and laying outside the trigger guard,” he said. “That’s hallmark American military training right there.”

Less frequently seen — because they are not so easily usable — are the more lethal weapons, including the A-29 Super Tucano, a turboprop attack aircraft reminiscent of a World War II-era Mustang but with modern avionics, and helicopters such as MD-530s and Black Hawks.

U.S. troops “demilitarized,” or rendered inoperable, 73 aircraft left behind at Kabul airport, along with some 70 MRAP vehicles and 27 Humvees, U.S. Central Command said. The deliberate sabotage was evident Tuesday, when Taliban officials toured the airport.

Although the A-29s were arranged neatly in their hangar, they stood amid a dump of camo-patterned bags, socks, bullet boxes, grenades and discarded food packets. Their avionics bays were open, and electronic boxes that operate vital systems, including the starter for the motors, had been ripped out, their components bashed to bits.

A C-130 transport plane parked outside squatted on one wheel, and the Black Hawks had their windows smashed and trash strewn inside bays that once carried vital supplies to Afghan soldiers or evacuated them, sometimes alive but often dead, back home.

Most ruined were the MD-530s. In flight, they were nimble helicopters, buzzing around and almost jousting with Taliban fighters assaulting government outposts. Now they were smooshed together in the hangar, as if a giant child had flicked them into one another. Their joysticks were cut at the handle.

The disarray left some Afghans angry, including one journalist who was no friend of the Taliban. But he was also unsurprised, he said. “This is what we’ve come to expect from Americans,” he said.

Some of the Afghan air force fleet had also been taken by their Afghan pilots to the Panjshir Valley in northern Afghanistan, where the anti-Taliban resistance is bunkered, or to neighboring Uzbekistan. Authorities in Uzbekistan confirmed last month that some 46 Afghan military aircraft landed in the country.

Although quips on social media about a “Taliban Air Force” are overblown, the group has managed to operate a few helicopters snatched from Afghan forces before they could destroy them. Dozens of Afghan air force pilots, many of them trainees, are still stuck in Afghanistan; some have been coerced into flying them for the group, said pilots interviewed by The Times.

Videos posted on social media from the southern city of Kandahar show a Black Hawk flying the Taliban’s white banner during a military parade this week. The occasional whump-whump of a Russian Mi-17 helicopter can still be heard over Kabul.

None of the aerial fleet left behind is cutting-edge, said a U.S. pilot and trainer who asked not to be named so as to comment freely. The aircraft, he said, were “stripped of every modern component.”

“They were sliced-up trucks, because the environment didn’t need the fancy stuff — they didn’t even have the standard self-defense systems,” he said, adding that the rules for selling the equipment to the Afghan air force required some demilitarization anyway.

Besides, whatever does fly now probably won’t be doing so in a few months, said an Afghan air force colonel who spoke on condition of anonymity because he recently escaped the country and still has family in Afghanistan. Even when the Afghan army existed, he said, it had no way of maintaining the aircraft without contractors and a steady pipeline of spare parts; bigger repairs required the aircraft to be taken to U.S. bases in the United Arab Emirates or Qatar.

“These aircraft aren’t flyable,” he said. “I’m happy they’ll try to fly them. They’ll kill a lot of Taliban when they do.”

Still, the Taliban is better off militarily than it used to be. There is also the public relations coup in commandeering U.S. materiel, said Damien Spleeters, deputy director of operations at Conflict Armament Research, a group that tracks arms transfers in conflict zones. “Weapon systems that are noticeable, like anti-tank guided weapons or man-portable air-defense systems, or easily recognizable and associable with the U.S. offer propaganda opportunities even if they would be less favored in the field,” he said.

The greater concern, Spleeters said, is that the arms could filter through to other militant groups in Afghanistan — with or without the Taliban’s approval. He pointed to what happened in Iraq, Syria and Yemen, where arms that the U.S. supplied to proxy groups often wound up in the hands of factions hostile to the U.S.

“The bottom line is that once you supply weapons to parties in conflict you open a Pandora’s box. These weapons will eventually end up in other hands,” Spleeters said. “It’s like a blank check. Supplying weapons inevitably ends up in other actors than intended getting their hands on them at some point.”

0 comments on “U.S.-supplied arms are now the Taliban’s, but some disabled”