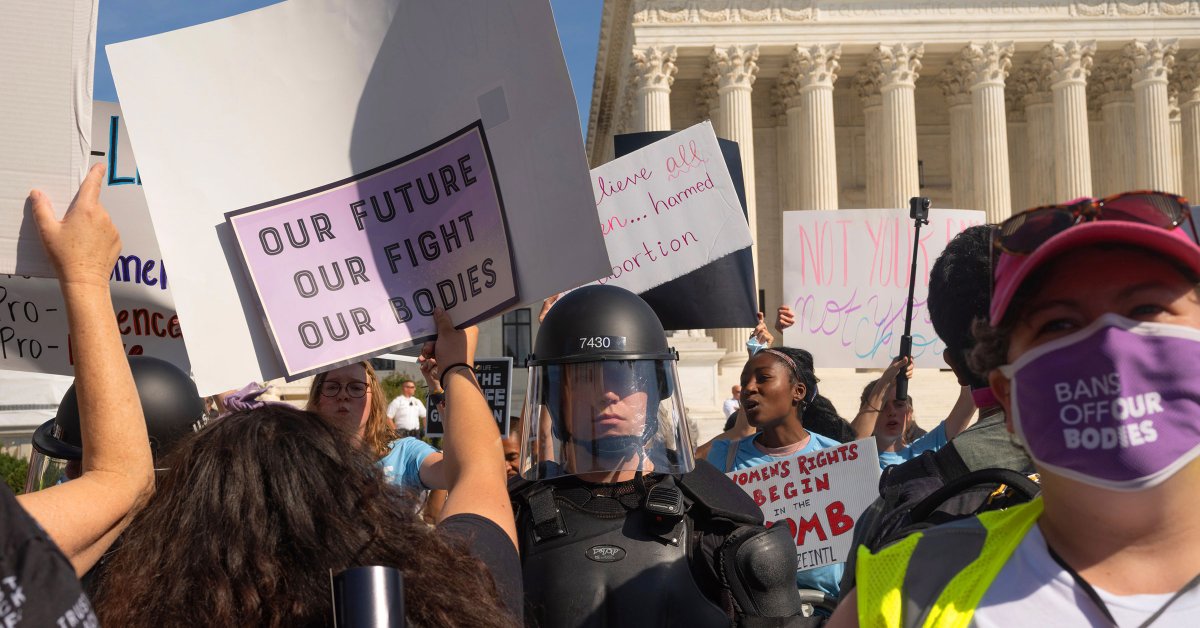 This article is part of the The DC Brief, TIME’s politics newsletter. Sign up here to get stories like this sent to your inbox every weekday.

When the Supreme Court Justices settled in this morning to hear arguments on the technical merits of a case involving a Kentucky law banning a medical procedure used in second-trimester abortions, the implications stretched far beyond the commonwealth and the narrow case about appellate power.

Kentucky is one of at least three abortion-related cases on Justices’ doorsteps this term, including more major and direct challenges to abortion rights in Mississippi and Texas. The controversial cases come as the very legitimacy of the Court itself is in question, with polls showing Americans’ shrinking confidence in the Justices—to borrow from Chief Justice Roberts’ confirmation hearing—”to call balls and strikes, and not to pitch or bat.”
[time-brightcove not-tgx=”true”]

Like so much else in this nation, the Supreme Court, long considered far above the fray, has become a partisan battleground. Progressive activists have remained unyielding with their calls to expand the size of the Court and to pack it with liberals as a counter-balance to the now 6-3 conservative majority. And conservatives who held their nose to vote for Donald Trump in exchange for his promises to overturn Roe v. Wade and to protect the Second Amendment now want their reward.

Accordingly, the Supreme Court has hit a record low in the public’s mind, with only 40% approval in its performance, according to Gallup. And in the span between July and September of this year—a period that saw Justices interrupt their typically sleepy summer recess to rule against a nationwide eviction moratorium, to reimpose the Trump-era “Remain in Mexico” policy and to allow Texas’ abortion ban to take effect while under legal challenge—the plummet was particularly sharp. In fact, a Marquette University Law School poll showed the Court’s approval numbers dropped from 60% to 49% in those three months, as the 6-3 conservative majority seemed to be advancing the GOP’s agenda. All of this is very bad news for those of us who think public confidence in institutions matters.

The question of abortion isn’t one that has shown much a shift over time. With the exception of a span in the 1990s, the number of Americans who say abortion should be illegal in all circumstances has held around 20%. The remaining 80% have fluxated on the conditions under which women should be allowed to seek legal abortions, but roughly half tell pollsters that abortion should be legal in all cases and one-third say it should be legal under certain circumstances. Decades of activism since Roe hasn’t really changed this ratio. Even among Republicans, still isn’t a majority; just 46% of those who identify as Republicans or lean that way told Gallup that they want Roe to fall.

But as the Supreme Court, lower courts and state legislatures have moved to take novel approaches to limit abortions, Americans are waking up to the stakes. It’s no longer the stuff of fundraising emails or extreme rhetoric at nominating conventions. The prospect of abortions rights’ limits is real, as TIME’s Charlotte Alter notes. Women, in particular, are telling pollsters at record levels that they would only support candidates who share their views on abortion rights, and the posture is consistent regardless of political party. Women made up 52% of the electorate last year and their views cannot be ignored.

To be sure, the partisan gap has widened to a shocking level. There has been—and probably will be forever—a difference between the parties on abortion rights. But what stood at a 33 percentage point difference between Democrats and Republicans in Pew’s 2016 polling has now grown to a 45 percentage point chasm. Both sides appear to be digging in, although it’s not universal; more than a third of Republicans told pollsters in 2019 that they disagreed with their party’s position on abortion, and almost as many Democrats said the same. Interestingly, the biggest cluster of disagreeable came from voters under the age of 50, suggesting the parties may have to eventually calibrate their rhetoric.

But for now, the Supreme Court has to deal with distrust of the Court itself and disagreements on the rights currently under review. Justices famously protest that politics creep into chambers and seldom make public comments. Unlike members of Congress or Presidents, there’s no public expectation that Justices explain themselves beyond their rulings. In fact, Justice Clarence Thomas went 10 full years—a modern record—without speaking during a Supreme Court session.

That code of silence now seems to be breaking. Four of the nine Justices in recent months have publicly addressed the fear of mistaking the marble Supreme Court edifice for the political slugfest of the Iowa State Fair. Thomas blamed the media for assuming he and his colleagues default to “your personal preference” on cases during a speech at Notre Dame. Also speaking at Notre Dame, Justice Samuel Alito too blamed the media in a speech that NPR’s iconic Supreme Court correspondent Nina Totenberg described as “a litany of acerbic barbs.”

A prickly Justice Stephen Breyer watched liberals implore him to retire at the end of last term so President Joe Biden and a Democratic Senate could keep that seat in the hands of a progressive jurist. He rejected their demands and joined today’s hearing from his cherished seat. Similarly, Amy Coney Barrett made an unusual series of comments while visiting The McConnell Center—founded by and named for the Senate Majority Leader who sped her confirmation to success in the final stretch of the Trump presidency—to similarly dissuade critics that the political environment shapes her rulings.

But no one is entirely immune to their surroundings and Justices have also acknowledged that reality before. Take for instance the changes on same-sex marriage. The massive shift in public support made the Court’s 2015 and 2016 rulings seem inevitable, and Roberts’ half-hearted dissent in the 2016 case was focused not on the right to wed but rather the end-run around changing the law by judicial edict rather than democratic election. Reading from the bench, Roberts encouraged Americans to celebrate the ruling if they were pleased, but noted the shift comes “just when the winds of change were freshening at their backs.” In other words, the result would have been the same eventually, but leveraging the Court to achieve it may have short-changed the victory of some of its persuasive powers.

Well, following that logic, the Justices might look around and consider the public has been consistent in seeing Roe as a settled matter. Since Gallup started asking the question in 1989, a majority has never wavered in saying it opposed overturning the ruling. The rule of law isn’t dictated by public opinion, of course, but the Justices who are so keenly aware of their own standing might do well to consider it. There is a reason their sacred standing in our democracy is facing an unprecedented degree of mortality. How else do you explain four of them taking such a public effort to campaign against the appearance of partisanship?

Make sense of what matters in Washington. Sign up for the daily D.C. Brief newsletter.